During the last two years we have been getting our electricity from our solar system which was a big help in getting things done. In the end it is much easier to use a table saw and chop saw and all the other electrical tools than doing absolutely everything by hand.

After having lived without electricity for a year in 2013 and getting a very small and simple system later on, we learned so much about our energy usage. With the awareness we gained we realized that we wanted to live with electricity being a luxury and not a necessity. We learned that every energy producing solution has an impact on our planets environment and that energy conservation is a key factor of sustainable living.

We can now really appreciate the bigger solar system we have since the spring of 2015. Big reason that we were able to get it was the support of Kevin Pegg from Energy Alternatives who helped us with setting up our system and even donated batteries to us. It wouldn’t have been possible without his help.

Kevin knows what he is talking about and if you are interested in alternative energy solutions check out his web site and/or give him a call. http://www.energyalternatives.ca/ 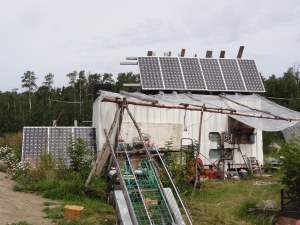